The USA Pickleball Association is growing at an exceptional rate thanks to the work of the volunteer Ambassadors who help to spread the word and devote their countless hours supporting local pickleball programs across our nation.  As this expansion continues, the borders of our Regions are beginning to burst at the seams. With that in mind, we wanted you to be the first to know that the we are pleased to announce the addition of the new NORTH MID-ATLANTIC REGION as our twelfth USA Pickleball Region.  This new region will change the Mid-Atlantic, which currently services ten states, to a plan of six states, which you can see in the mapping below. The state of New York, which has been in the Atlantic Region, will now be part of the new NORTH MID-ATLANTIC REGION.

There were many factors that went into the decisions to create these new borders, and in the end, it came down to the current population numbers and developmental capacity for this new region. After several months of planning, the USA Pickleball Board of Directors has given the “Green Light” to move forward.

One of the biggest benefits of adding a new region is making the service areas for our Ambassadors more manageable, allowing them to provide better service. In addition to local and recreational coverage, this new region will be added to the existing lineup of Regional Championship Tournaments for those who are regular tournament players hoping to show off their talents in the 2021 season.

We are extremely excited as we expand our regional coverage to better serve the growth of the USA Pickleball brand. There is still a lot to be done to make this change official. There will need to be new logos, official USA Pickleball regional paperwork, post and interview for a new Regional Director and more. The current districts will remain the same and will only change as needed to accommodate the growth of membership and the addition of new Ambassadors to the program areas. We just ask for your patience during the changeover to the new borders and as we make necessary leadership adjustments. The next few months will be a new look and beginning for the Atlantic coast regions, but until we have all the information laid out in an official capacity, we will continue to run as normal.

We hope to have the new region up and running within the next few months, so stay tuned for more details. Below you will find the new map of the reorganized Upper Atlantic Shore Regions. 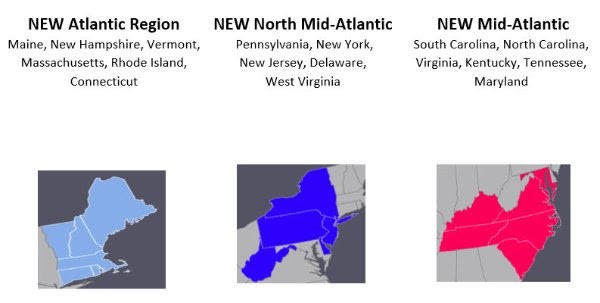